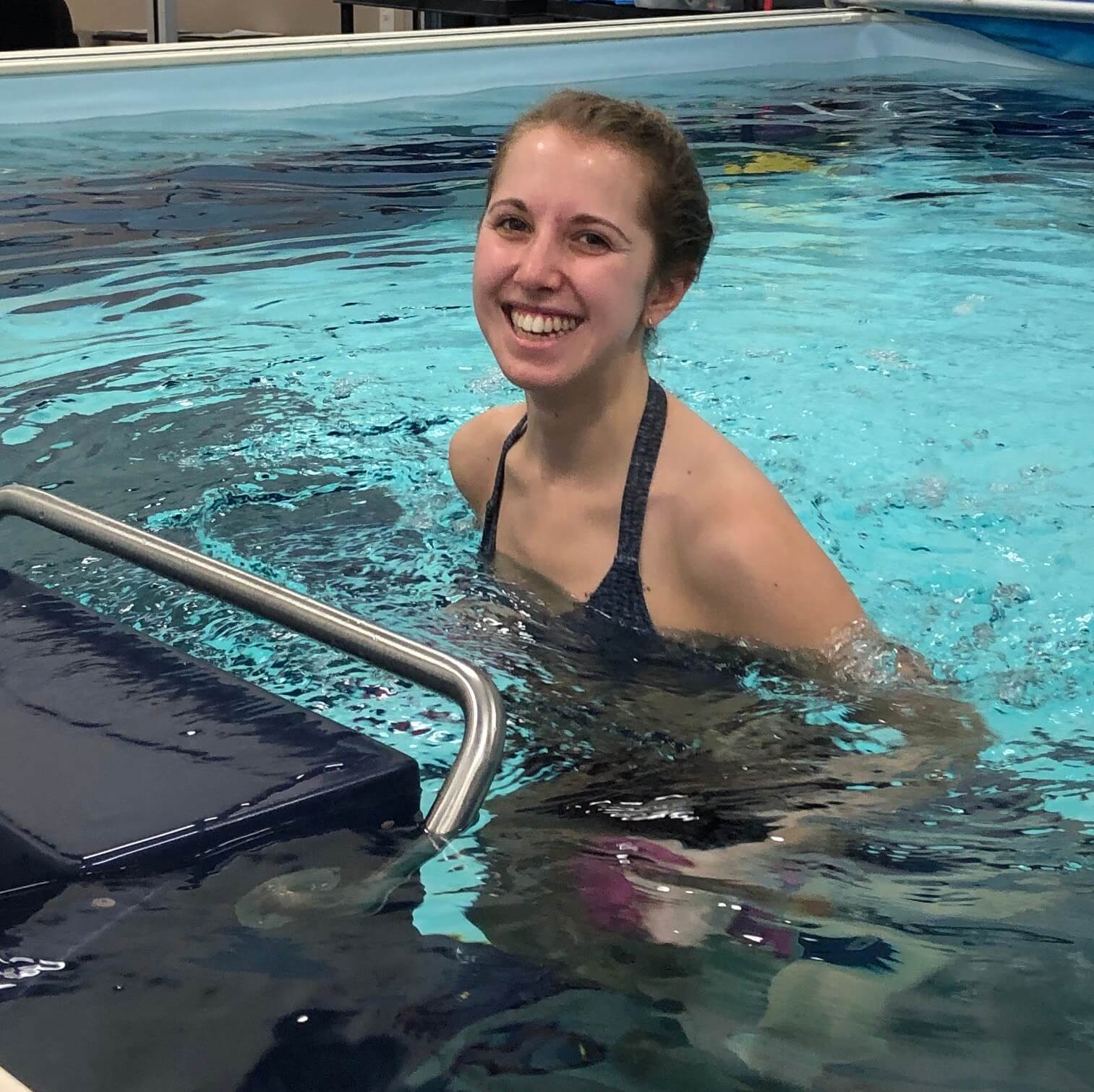 A broken back, ribs, wrist, and foot – Stacie had a long road to recovery after her accident. Between her two back surgeries, she discovered ProSwim Fitness in Mt. Laurel, New Jersey, and began training in their Endless Pools. The result: "I'm in way better shape than I was even before the accident," she reports now.

Because of her back injury, Stacie "didn't walk for a long period of time. I wasn't going up and down stairs. I couldn't lift anything over 10 pounds. I had a rod and four screws in my back, so I had a lot of limitations."

The Limitations of Dry-Land Therapy

Stacie went to a national physical therapy network, but they had no therapy pool. They offered only dry-land therapy for her wrist and foot "for about a month or so, and that was pretty much it."

After months on inactivity, Stacie "had a lot of muscle atrophy. My doctor told me there really wasn't any therapy I needed to do for my back." To rebuild her strength, she was told, "I just needed to walk, and I could take up swimming.

"I thought about joining a YMCA, but I didn't have any direction with it. I didn't know what I was aiming to do, so I just gave up on the idea."

From Social to Swimming

Stacie discovered the ProSwim Fitness through a string of coincidences. Back before her injury, she and Endless Pools' Web Designer, Jackie, "became friends on Instagram" after they both attended the same wellness festival.

"I kept following her," she recalls, and after her injury, "I saw her post something about the pool." It was this post, below, of Jackie about to use the Underwater Treadmill in an Endless Pools swim spa.

When Stacie saw Jackie's Instagram post, she immediately commented about it. After exchanging a few private messages, Stacie realized, "The resistance, and being able to strengthen that way, was the ideal option for me."

Splashing to a Quicker Recovery

Jackie referred Stacie to ProSwim Fitness, a nearby wet-dry fitness facility owned and operated by the Finch family. Unlike the chain, ProSwim features three Endless Pools, including one Dual Propulsion model, for therapy, fitness, and swim training.

"Two months after I started at the pool, I got my second back surgery to remove the screws and the rod. I think one of the reasons I was able to have such a quick recovery from my second surgery was all the work that I put in in the pool leading up to it. I was a lot stronger."

At that time, "it was definitely too painful" for Stacie to train on dry land. "I was very weak, and I had a lot of restrictions. It was really difficult; I had to have people do things for me all the time. The water allowed me to gain a lot of that back."

I'm slightly less bionic now (yes, all those screws and rods were in my back) ???? My 2nd and FINAL surgery was a success! Special thanks to my bff Dr. Handal! ??: @kevco122

So what makes Stacie say not that her accident was "almost a good thing"? It's the results she got from aquatic exercise at ProSwim. "I'm in way better shape than I was even before the accident – stronger, more muscle, that sort of thing. It was really exciting to feel that."

She gives much of the credit to her coach, ProSwim's Marty Finch, for his holistic approach. "Through his eyes, it was never really therapy; for him, it's all exercise. He does this for people who are just trying to lose weight. For me, it was to build muscle, get more in shape, toning, strengthening, all that kind of stuff.

"I wasn’t much of a working out person prior to going to ProSwim. Now, it's a part of my everyday life."

This snowy Monday has us dreaming of warm weather and the beach! So we cranked up the heat and brought out the boogie board for our client Stacie today! Endless options with @endlesspools

A year after starting at ProSwim, Stacie's coach "does a different routine every week. It's never the same.

"I'll use weights that have more resistance in the water. I'll put on flippers, and we'll do swim strokes with a little paddle board. We use all different kinds of equipment depending on what he has in store for me that day.

"There's also a bike in the pool, and Marty will turn the resistance on and have me with the bike facing the resistance. I do mountain climbs on the bike, and I'll put special gloves on and be pedaling the bike but moving my hands in the water in front of me to establish more core strength."

Even when Stacie isn't swimming, the Endless Pools swim current provides resistance for other types of exercise. "Most of the time we have the current on for something. I can't run on the treadmill without it now; it feels too easy. I enjoy the challenge."

By October, Stacie had progressed to running her first 5K! "I'd never run before, so that was a big accomplishment. I signed up for another one in a couple of months."

Professionally, Stacie frequently works trade shows, and her new fitness levels have helped with those. "I can do a whole booth by myself in 45 minutes. It used to take me an hour and a half. I have a lot more stamina. I also have to stand for long periods during the day, up to 12 hours sometimes. I've gotten a lot better at that too.

"I love the pool," Stacie enthuses. "I'm glad that Jackie introduced me to it and that I wasn’t afraid to reach out to them and just go for it. It's just an awesome concept. I wish more people could have access to it."

Completed my first race! Ran 5000 yards in 36:35! This time last year I was transitioning from wheelchair to walker. I still wore my back brace (or turtle shell as some referred to it) at all times except when laying down. I made it a goal for 2018 to run a race to remind me of how far I've come. I'm definitely not a runner, but I am so proud of my body and the progress I continue to make every day. ??: @sfrenchfrey