Why Lionel Sanders Will Exit Kailua Bay Faster than Ever 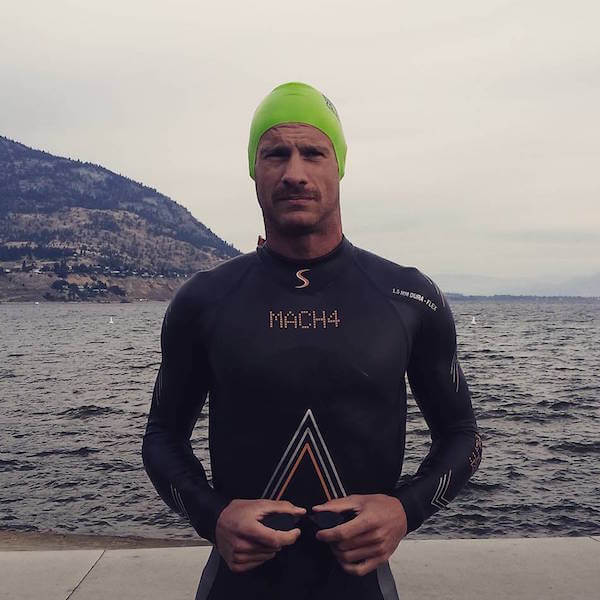 Lionel Sanders is about to be put to the test. Tomorrow, the 29-year-old professional triathlete will compete at the IRONMAN World Championships in Kona, Hawaii. Despite seeing himself as "a weak swimmer," he just upped his game: he's been training in his own High Performance Endless Pool® for two months, and already he's seen measurable results!

Bad Timing
"My first triathlon back in 2010, I was almost last place out of the water," Sanders recalls. His swim training was hampered by the mid-day or late-night hours at his nearest public pool.

"I'd rather swim first thing in the morning. I was swimming after both my bike and run. No wonder I wasn’t improving – I was always swimming tired! As a weak swimmer, you need to be firing at full potential.

"Most of my swimming is now done in this Endless Pool." Besides his early-morning ritual, "you need to swim when inspired. I can get in the pool immediately upon being inspired and can swim an extra 4 kilometers."

"I'm just a completely different athlete both physically and mentally," he says confidently. "I'm looking to have a much improved race."

Correcting the Crossover
Unlike training with his bike and run, "I hadn't been able to see myself swimming." That changed when he took an Endless Pools test-swim this spring.

By swimming in place, you can watch your stroke in the Endless Pools underwater swim mirrors. "I looked at myself in the mirror and said, 'Yup. One hundred percent!'"

Real-time stroke analysis in the Endless Pool has allowed him to make daily improvements to his swim technique. "I'd been crossing the centerline. That was the first thing I needed to correct.

"I crossed over both left and right at entry. So I didn't have a stable core, so my hips went the opposite way. To counteract, I'd do a scissor kick," This technique flaw created "a massive amount of drag. Look at any great swimmer: no one does that!"

Thanks to the Endless Pool he installed in August, "I've been able to correct that. There's no crossover. Really, my swim improvement started two months ago.

"I've got so many things to improve upon now that I know what I’m doing. Every single day I do a technical session, I can see clearly if I'm improving."

Out of the Water Faster
Just weeks after beginning his Endless Pools training, Sanders returned to the ITU Long Distance World Championship. As in 2016, he was up against the dominant Australian triathlete, Josh Amburger.

Amburger is a particularly strong swimmer, and Sanders is used to trailing him out of the water. This year, Sanders happily reports, "I had my least deficit ever to him by a significant amount. And I swam completely solo."

After a solid bike and an outstanding run, Sanders landed at the top of the podium; Amburger took silver.

Now in Kona, Sanders feels optimistic following a preliminary practice swim. Using the UK triathlete Harry Wiltshire as a metric, "I was 8:41 down" out of the water in the 2016 Finals. "This year, [at practice] I was less than 4 minutes down to the same guy.

"I've been improving across the board a significant amount."

Thanks @pioneerfamilypools_london for letting me test out the @endlesspools today! Definitely the best technical aid I have ever seen- first time I've ever seen myself swimming in real time! What do think guys? Should I get one? . . #swimming #swimmore #justkeepswimming

"The Gold Standard"
The improvement isn't entirely unexpected. "I'd been very aware of the Endless Pools products for years. I'd been dreaming of getting one because I saw the value."

When discussing training pools with other triathletes, he recalls repeatedly hearing, "'If you're going to get one, get an Endless Pool.' I had a friend who has a Fastlane who recommended one."

The Fastlane is Endless Pools' standalone swim-current generator for traditional pools. Unlike Sander's High Performance model, the Fastlane has a narrower, shallower current; one propeller instead of two; a slower top speed; and no return channels to reduce turbulence. Still he finds that "even the Fastlane has a pretty realistic current" for open water swimmers.

"I heard from people I trust that this is the gold standard." So after experiencing the Endless Pools swim current for himself, "it was a no-brainer. "

Swimmer in Progress
Before turning to triathlon, Sander had only been a runner. "My swim experience before triathlon was just backyard swimming lessons. It's been an arduous journey to get myself to a competent level."

Competing in Kona for the third time this year, he has a bit more perspective. "The first time I did this race, I was a kid. The second time, I came massively under-prepared; it was a humbling experience.

"I'm just a completely different athlete both physically and mentally," he says confidently. "I'm looking to have a much improved race."

UPDATE:
On Saturday, October 14, 2017, Lionel Sanders earned silver in the IRONMAN World Championships! His swim time of 53:41 was exactly 3 minutes faster than his previous best.

The time has finally come. Getting serious about the swim with the help of the new @endlesspools! #kona #swim #every #damn #day . . NO LIMITS! Special thanks to @pioneerfamilypools_london for your help!