The Olympic and Wartime Heroism of Alfred Nakache 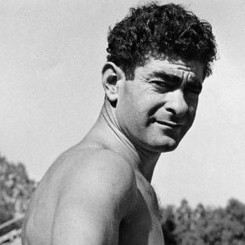 Inspiration, heartbreak, seemingly insurmountable odds – these are all common in the stories of the post-WWII Olympic Games. The story of swimmer Alfred Nakache, however, may be the most extraordinary. Although he did not medal, he remains one of two known concentration camp survivors to compete.

Nakache was at the height of his swimming career when his right to compete as a French Olympian was taken away by the occupying German forces. Throughout the events that followed, he displayed incredible emotional resolve and physical endurance.

His Early Years
Alfred Nakache was born November 18, 1915, in Constantine, French Algeria, to a traditionalist Jewish family. He overcame a deep fear of water by swimming at a local club, where he saw a rapid progression of his swimming skills.

He first competed on the national stage at age 17. In 1935, he scored the first of a long string of Champion of France titles. He quickly became the face of hope for French swimming and for the French people.

Swimming Against the Tides of History
At the 1936 Berlin Olympics, Nakache earned 4th place in the 4x200-meter freestyle relay; his team finished ahead of their German rivals, but fell short of a medal.

In 1941, he set a world record for the 200-meter breaststroke in Marseilles, taking the mantle from a German swimmer.

As a Jew, Nakache faced discrimination in France during these years. He was restricted from entering swimming races by the occupying German authorities, despite the best efforts of his teammates and fellow swimmers who withdrew in protest. Georges Drigny, president of the French Swimming Federation, also offered public support.

The War Years
Nakache and his wife - Paola, also a competitive swimmer – and their two-year old daughter, Annie, were arrested and sent to Auschwitz in January 1944. After the emotional highs of his swimming career, Nakache was now experiencing previously unfathomable lows.

At Auschwitz, Alfred was separated from his family. He was forced to swim in the camp’s frigid, brackish water-retention basins for the Nazis’ entertainment. Although weak and emaciated, he swam well and endured the torture as if it didn’t bother him.

Through it all, he clung to the hopes of his wife and daughter’s survival. Eventually, though, he received official word of their deaths.

Nakache was moved to Buchenwald shortly before the camps were liberated by Allied troops. Of the 1,368 people to have arrived at the camps in his convoy, he was one of only 47 to have survived.

A New Life After the War
Upon his return to France, Nakache went to Toulouse and moved in with the family of a fellow swimmer, Alex Jany. The Janys helped him reconnect with his passion for swimming.

Within a year of the liberation of Buchenwald, he set a world record with his French team in the 3x100-meter relay. That same year, he became French National Champion in the butterfly and in the 4x100-meter relay.

In the 1948 London Olympics, Nakache made it to the semi-finals of the 200-meter breaststroke. He was also a member of the French water polo team. He is believed to have been one of only two Holocaust survivors to compete in these Games. (Ben Helfgott, a Jewish weightlifter from Poland, was the other.)

However, he made no further accomplishments at the 1948 Games and soon retired from professional swimming.

Even without a medal or a world record, Alfred Nakache demonstrated an astounding, inspirational resilience, an accomplishment far rarer than Olympic gold.

Retirement from Swimming
Alfred continued to rebuild his life and even remarried. Ironically, at age 67, Nakache died on the beach at the Port of Cerberus after suddenly falling ill during his daily swim.

At his request, his headstone also bore the names Paola and Annie, his late wife and daughter.

Postscript
Long after Nakache's death, in 1997, a toy dog that belonged to Annie was found. Simone Fuller, a child-minder at the concentration camp, kept the small dog for over 50 years.

Behind the dog's ear hung a note penned? by Fuller herself: "I was the companion of Annie Nakache, buried alive by the Germans, her mother burned at Dachau."

Piscine Alfred-Nakache, a still-functioning pool in Toulouse, commemorates his accomplishments.