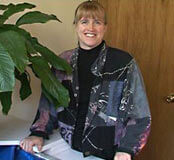 Water's buoyancy is germane to various therapeutic uses of the Endless Pool, but never more so than in the case of exercise during pregnancy, as Linda Braley discovered recently. Before and after she gave birth to little Amanda Grace in November, Linda exercised and stretched in the Endless Pool frequently to alleviate symptoms without risking injury.

Many of the benefits of aquatic therapy are universal, including cardiovascular health, improved mood and sleep patterns, weight reduction, and increased energy. Others are specific to, or are vastly more important for, women who are expecting.

For example, breast growth and abdominal expansion shift a woman's center of gravity forward, making back pain and sciatica -- pressure on the long nerve passing down the back of the thigh -- common during pregnancy. Hormonal changes initiated by pregnancy also result in greater laxity and mobility in joints, thereby increasing the risk of injury, especially to hips, knees, and ankles. The zero-impact nature of exercising in water alleviates both conditions.

Then, too, aquatic therapy has proven particularly effective in combating another problem exacerbated by pregnancy, water retention, both by metabolizing calories and by the pressure exerted by the pool's water against the skin. The weightlessness of exercising in the Endless Pool means women can stay active right up until term, while being careful to avoid overexertion and overheating.

Linda's exercise routine consisted of about 10 minutes of light swimming and 20 minutes of jumping jacks, scissor-kicks, lunges, arm movements, and abdominal calisthenics, three or four times a week. And, having used the Endless Pool before and after giving birth, she discovered a somewhat-unexpected advantage during pregnancy.

"I was used to doing a lot of stretching, and I found that when you're pregnant, it's just very awkward to get into certain positions," she says. "But in the pool, you can use different buoyancy objects to help you stretch in ways that are impossible without being submerged in water."