Back to Swim School with Endless Pools 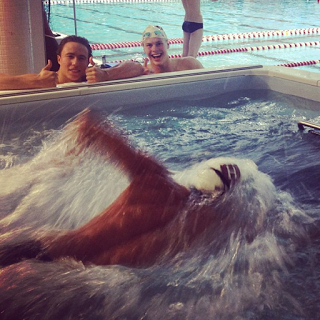 School’s back in session, and on the pool decks at select universities, including Harvard and USC, that means it’s time for stroke refinement in the Endless Pool®.

Earlier this year, Arkansas Razorbacks' then-Head Coach Sean Schimmel told an interviewer, “We have been getting great facility upgrades with the new team suite and the Endless Pool. Those two things just really help our team's experience and our ability to get better.”

The Razorbacks’ Elite Endless Pool allows Schimmel’s swimmers to swim in place, carefully observing their strokes in the underwater or overhead/backstroke mirror – up to a blistering 0:51/100-yard pace!

Schimmel added, “It is certainly an exciting time to be a part of our Razorback Family.”

Working on our technique in our new @endlesspools! Getting better this off season! 🏊💪 #H2oGS

At Penn State University, the Lion swimmers love their Elite. "It's a huge help with fixing strokes," senior Nate Savoy told a student reporter last year. "The mirrors really make it easy to see what you're not doing correctly and to be able to fix it."

"It's a great tool in helping us perfect technique," senior Caitlyn Karr noted. "Especially with how close we are to Big Tens, every little thing counts at this point."

In a separate interview last year, PSU Head Coach Tim Murphy told us, “The Endless Pool can teach you efficiency, and it can teach you how you create speed.” He called it “a tremendous tool [that] helps to create a more enhanced learning environment.”

Crimson swimmers continue to use it for training and for some friendly intramural competition.

#tbt to being reunited my my precious @endlesspools while visiting Boston last month!

At the University of Louisville, shouts of “Go, Cards!” can be heard alongside their Elite. Stephanie Juncker, the Cardinals’ Assistant Swimming Coach, has called it an “awesome tool” that gets used “on a daily basis.”

One of the awesome tools we use on a daily basis - our @EndlessPools Stroke Lab is a Game Changer 4 @UofLswim_dive! pic.twitter.com/iwH7AHQ6gR

The University of Southern California’s Elite Endless Pool was requested by, and named for, their esteemed coach, David Salo. Salo is renowned for coaching a slew of Olympic medalists, including Jessica Hardy and Jason Lezak; for the 2004 Athens Olympics, he served as Assistant Coach to the men of Team USA.