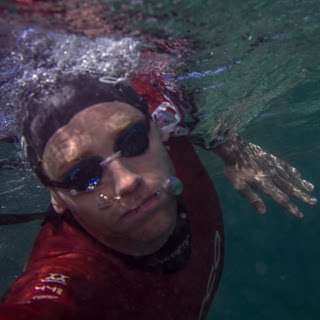 Last week, professional triathlete Andrew Starykowicz (STARK-o-witz) recounted how he used his Performance Endless Pool® to quicken his recovery from 2015 bone-spur surgery. Andrew came back to win the 2016 IRONMAN 70.3 New Orleans. Today, he discusses other benefits to his triathlon training in his basement Endless Pool and how it helps him in open water.

Going into the 2016 season, I found myself preferring the Endless Pool to the lap pool for many reasons.

The first is the convenience; I could take the baby monitor and get a swim in after my wife leaves for work and before my daughter wakes up.

The second is that it was something new to swim in a pool without flip turns. The difference between a traditional pool and an insane asylum is the pools walls are not padded; the hours of going back and forth made it hard for me to get motivated to swim.

The third is that I could do pace-based training in the water. So many athletes love their treadmills or cycle trainers because they can set a pace and then execute their work out perfectly. I adapted this technique and mentality to the pool. The Endless Pool allowed me to lock in and focus on how to maintain a pace with minimal energy exerted. This became my challenge in every workout: how little can I work to hit goal paces. I had literally stopped trying to swim fast and just make fast paces easier.

Going into the first event for 2016, I was quite nervous because I had not been in an actual pool yet; training had consisted exclusively of swimming in the Endless Pool, so IRONMAN 70.3 Puerto Rico would be the test. The field had a few of the fastest swimmers in the sport, and I knew that if anything other than my “A” game would leave me out of contention.

The sensation of swimming in the open water versus the Endless Pool is like that sensation of going from a treadmill to open road. The feeling of the ground just flowing underneath you is just pure and effortless, and it definitely triggered additional excitement in the opening minutes of the swim.

The first few hundred meters were chaotic, but I quickly learned that my fitness was better than expected. I settled in on the feet of the leaders, just swimming along. The race literally felt like another Endless Pool workout – except the grate of the Endless Pools swim current generator was now the leader’s toes.

I just went through my mental checklist of things to be more efficient in the water. After 2,000 meters, I exited the water with nothing lost, but a lot of energy saved.

Over the next few months I would race wetsuit-legal races, non-wetsuit races, half IRONMANs (70.3), full IRONMANs – in the swim, all of them had become a game of efficiency. The beneficiaries of this efficiency were my bike and run.