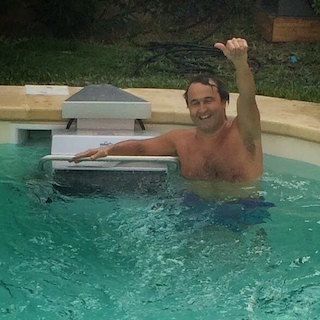 For "Flashback Friday," we're reviving this video post from 2015.

Uruguay ranks high on many economic and social measures. Yet the peaceful South American democracy lags in one key respect: Endless Pool® ownership! So Daniel F. is something of a pioneer.

A resident of Montevideo, Uruguay’s capital, Daniel just installed an Endless Pools Fastlane® swim-current generator in his existing pool. That makes Uruaguay the 101st country in which we’ve installed a swimming machine!

“IMPRESSIVE!!!” was Daniel’s assessment after his first swim, documented in this video. “I was very pleasantly surprised, and I only tried swimming slower than the maximum speeds,” he wrote to us. For its cardiovascular workout and ability to help him “sustain a great swim technique,” he concluded, “the Fastlane is very enjoyable.”

For non-Spanish speakers, the off-screen voice first says, “Look at Aquaman!” The next statement – “Guillen, this is for you!” – is directed at the friend who’d advised against purchasing the Fastlane! (We find that the best way to address the skeptics is to let our current speak for itself.) After his swim, a slightly winded Daniel remarks, “That was only halfway to top speed.”

We look forward to future reports from Daniel as he develops his stroke and fitness level to handle the Fastlane’s higher settings.