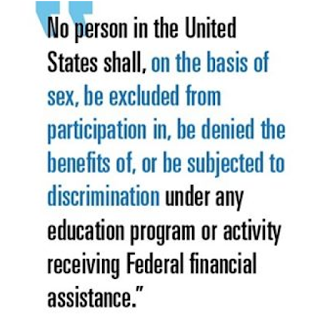 This quotation (left) comprises the core of Title IX, the landmark legislation signed into law on June 23, 1972. Its impact has been particularly notable on female athletes. Before Title IX, their prospects were considerably limited.

In 1971, girls accounted for a mere 7% of all high school varsity athletes; in 2001, their numbers had grown to 41.5%. The collegiate statistics are similar.

Consider the career of swimmer Donna de Varona. While still a high school student, she won two gold medals at the 1964 Olympics in Tokyo. As she recounted to USA Swimming in a 2015 interview, she then had virtually no options to continue swimming as a college student.

Since then, she has fought to support younger generations of female athletes while building her own career as a sports broadcaster. Her legacy includes tireless work to pass Title IX.

As de Varona views it now, the law is less about equality between the sexes and more about the equitable distribution of resources. The result: A New York Times article reported that sports participation has contributed to increased educational and employment opportunities for women.

These days, the full extent of Title IX is still being determined. In areas such as sexual assault and transgender rights, the law remains a hot-button issue. But for up-and-coming role models such as Katie Ledecky, Missy Franklin, and Simone Manuel, Title IX stands as the bedrock on which they’ve been able to build careers, world records, and their own self-esteem.

26/100: I can't even imagine what our school system/general state of this country would look like without the vision & work of Patsy Mink. She was the first non-white woman elected into congress and the primary author & sponsor for Title IX. In 1972 Title IX prohibited discrimination based on sex in any educational program or activity that receives federal funding. It addresses discrimination in sports programs, access to higher ed, ed for pregnant & parenting students, sexual harassment, standardized testing, math, science, technology, ed careers, & sexist learning environments. Prior to this law schools could openly teach that girls should be nurses while boys should be doctors, colleges could & did purposefully deny acceptance to women, & high schools could promote that sports were for lesbians while actively denying them opportunity to participate. So very basic as this seems, the work of Title IX has been challenged 20x in its 44 years in existence. -------------------------------------- #100daysofinspiringwomen #the100dayproject #girlpower #inspire #womeninpolitics #politics #womeninhistory #womenshistory #patsymink #titleix

#tbt #flystyle #myt9 edition: don't get it twisted. It's actually not an anti-cheerleading shirt. This #PowerOfIX collaboration shirt celebrates the time when women and girls were finally allowed to choose something other than cheerleading--or to choose cheerleading because they wanted to, not because it was the only option. My own mother had to take "trampolining" for PE in high school because it was one of few options given to girls then. I feel very, very fortunate to be part of a new generation of women who have no idea what it is like to not be able to participate in their sport of choice. Soccer, one season of short-team volleyball, track and field, and now, a return to soccer and a newer relationship with running. I've found my sports. I can't wait to help my daughter explore the possibilities and find her own. Proceed directly to the sport of your choice. . #TitleIX #womeninsport #sistersinsport #motherrunner #running #womensrunning #OiselleVolée #headupwingsout #soccer #track

I want to play. As a professional. Not a hobby or a side project. Put me in coach. But pay me and my sisters what is fair. #soccer #soccergirl #fairpay #equalpay #wagegap #titleIX #equalpayact1963 #equalpayact #equalpayforequalwork