This Day in Swimming: Stephen Redmond Completes the Oceans Seven 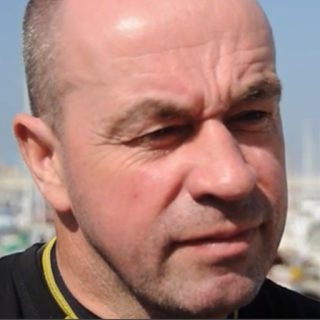 On the morning of July 14, 2012, Irish swimmer Stephen Redmond emerged from the Tsugaru Channel onto the shores of Hokkaido, Japan. It had been nearly 13 hours since he’d left the coast of Honshu. By successfully crossing the channel, the 47-year-old was the first person to complete what’s known as the Oceans Seven.

Conceived by marathon swimming guru Steven Munatones, the Oceans Seven was designed to include a well-rounded selection of major open-water swim. The Seven features both cold and warm-water swims under a wide range of conditions.

Redmond claims to have taken up marathon swimming when he became “too old and too slow” for rugby. His humility aside, here are the highlights of his extraordinary achievement.

1. The English Channel
Redmond completed his swim from England to France in August 2009 in 20 hours, 1 minute.

Ironically, the English Channel was the only channel swim that Redmond had set his sights on doing. When he swam it, he didn’t even know about the challenge of swimming the Oceans Seven; it had only been conceived the year prior.

2. The Irish North Channel
The swim from Scotland to Ireland took him 17 hours, 17 minutes in August 2010.

He recalled the North Channel as having water temperatures in the low 50s. The region’s weather and prevalent jellyfish made this swim particularly risky.

3. The Strait of Gibraltar
In May 2011, Redmond swam from Spain to Morocco in five hours.

According to the determined Irish swimmer, the Straight of Gibraltar is an enjoyable swim; however, it does require patience. His average pace while swimming the channels was 48-52 strokes per minute.

4. The Catalina Channel
Redmond swam from Catalina Island to California in October 2011, in 12 hours, 39 minutes.

Soon after completing this swim, Redmond told an interviewer that he’d been afflicted with digestive troubles and hours-long delays due to strong currents. “It was the worst experience of my life,” he said flatly.

As if currents and swells, frigid waters, and jellyfish weren’t danger enough, marathon swimmers also risk sunburn. During the Cook Straight swim, he suffered second-degree burns on his face and the backs of his legs, the latter of which he characterized as “lethal” and extremely painful.

6. The Molokai Channel
From Molokai to Oahu, Hawaii, Redmond took 22 hours, 29 minutes to complete this swim in February 2012.

Redmond described this swim – his second attempt at Molokai – as transformative: “You go out there and come back different.”

7. The Tsugaru Channel
Redmond completed this final swim in 12 hours, 45 minutes. It was his fourth attempt to successfully cross this channel.

The Tsugaru Channel was more of a challenge, Redmond stated, due to strong currents and opposing winds creating a powerful tidal flow. Also complicating matters, he and the local crew spoke different languages, requiring them to communicate with signals and gestures.

Defeating Oceans Seven
Such feats required more than just physical fitness, endurance, mental fortitude, and patience. They also required money. Redmond was able to achieve his Oceans Seven accomplishment, in part, with funds raised through his own Facebook page.

Once in the water, Redmond meditated on his children to give him the motivation to complete each swim.

In 2012, after completing the Oceans Seven, he was named the World Open Water Swimming Man of the Year; it was his second nomination for the title.

Stephen’s Legacy
This swimming star has become a film star; he was featured as the protagonist in a documentary, Defeating Oceans Seven, produced by Red Bull Media House. This film premiered at the prestigious Cannes Film Festival.

Redmond and his impressive accomplishments were also featured in the television series Explorers: Adventures of the Century.

Later in 2012, Redmond became the first person to swim around Fastnet Rock. Ireland’s most southerly point, the island is small, but its waters are notorious for huge swells and strong winds. He completed this swim in 12 hours, 28 minutes.

Redmond remains humble about his own legacy and encouraging to his fellow marathon swimmers. “If I can do it,” he’s said bluntly, “anyone can bloody do it.”