This is a tale of reckless youth and redemption, of indulgence and determination, of 60 pounds gained and 80 pounds lost. And, of course, it's also a tale of an Endless Pool®.

Let's start a few years back. Mike Ydavoy (pronounced EYE-da-voy) lived in Florida, had success as a property manager, and swam daily in his outdoor pool. When work brought him up north, to suburban Philadelphia, he had no pool and discovered a new food landscape. "I wound up gaining 60 pounds, and that was putting pressure on my knees, which were already bad. … I didn't take care of them when I was young; I did foolish things" (on which he did not elaborate).

His knees required surgery. He wanted to condense the recovery time, but "my doctor did 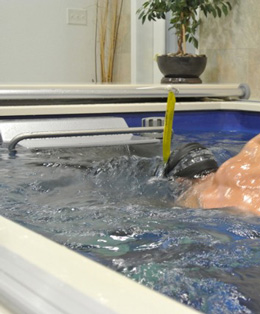 not want to operate on both knees [at once] without me losing weight. He said, ‘You get down to 250, and I'll do both knees.'" At the time, Mike weighed 318 pounds.

He needed to start swimming again, and he needed to do it indoors to be consistent in a climate with four distinct seasons. He tried a local gym's pool, but "with the chlorine level that they have to maintain, I was having a really bad reaction on my skin."

That's when he chose to get an Endless Pool. "That really made the difference. The mental aspect of me getting in shape is 100% from the Endless Pool. Watching the calories is good, but it's no fun. Swimming is fun." With its low-chlorine water purification, his Endless Pool's water doesn't irritate his skin.

"Once I got back in the routine of swimming every day, the pounds started coming off." He's down to 238 – 80 pounds lighter! "The Endless Pool was part of it. Quite honestly, I'd say at least 50%." The other half (or thereabouts) was calorie-counting and the MyFitnessPal app to precisely track his efforts. "Without measuring, you don't know if you're getting results. That accounts for a lot of my mistakes throughout the years."

On December 9, 2014, he had surgery on both knees, and he's since progressed quickly. "I didn't realize how important it is to have good muscles in your legs when you have this operation. I'm so glad that I worked my legs up to a good muscular level by swimming. I think that's helped tremendously in my recuperation.

"I was the first one in the hospital to have bilateral surgery and walk out in two days. Normally, it's three to five days. I went from a walker to two canes to one cane. I should be walking without a cane in a week."

Until the incisions heal, his legs cannot be immersed in water, so Mike cannot swim for at least another week. "I'm missing it terribly. The worst part of the operation, besides that it's extremely painful, is the boredom."

"When I was swimming, my energy level was just tremendous. It's the best exercise that you can do. Right now, I'm reduced to hand-squeezers and dumbbells for whatever exercise I can get. But when you're swimming, especially freestyle, you use every muscle in your body. I had an issue with my shoulder. I started swimming because of my knees; well, my shoulder issue is gone! And my hip too is feeling better, and that's definitely all the swimming.

For others trying to lose weight in the Endless Pool, he offers two tips. First, "I cheat. I brought my snorkeling gear from Florida and that allows me to swim half an hour at a time; otherwise, I'd lose my breath."

Second, his Endless Pools Design Representative turned him on to the underwater MP3 player by FINIS, which he calls "tremendous! Basically, I'm swimming to the songs as opposed to dancing to the songs!"

This Friday, Mike meets with his doctor for the first time since his surgery. He expects to receive an excellent report and (fingers crossed) to be cleared for swimming soon. He has a ways to go yet to get back to his old self, but in his eyes, the watery path is clearly mapped out.