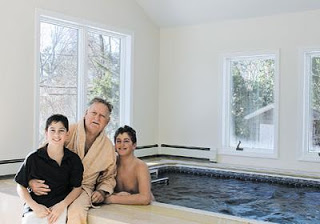 For 25 years my husband Stu has been yearning to have an Endless Pool in his house. He had seen, for years, an ad for the pool in The New Yorker magazine. The ad ran every week and he always thought about the possibility of owning one. Well, it took 25 years and now his wish has been fulfilled. See, advertising pays!

Our Endless Pool is 12 X 20 feet in size and is installed inside the house. It runs a current that you swim against so you are basically swimming in place because the current is so hard. We decided to put one in a sunroom and, after six months of construction and installation on Sunday, I had my first swim in it. What fun!

The water was heated to about 80 degrees and when I put my toe in chills filled my body because it was too cold. But I wasn’t going to give in to my shivers. I proceeded slowly and put one leg in, then the other and I was in up to my knees. I wasn’t sure how many steps would put my body totally underwater. As it turned out on the last step I “fell” into the four-foot-deep pool. With a few screeches and hollers my body adjusted to the temperature and I began my breaststroke to the other end.

Stu adjusted the current so I wasn’t pushed back to the wall. Swimming in the middle of pool is where the current is strongest. It was a great workout, swimming, kicking and cycling in the water. It felt so good … then a few hours later Stu’s grandsons Zac and Ben came over and they took a swim too. The pool really only permits one person at a time to swim, but Ben was able to swim on the side where the current is gentle and Zac took on the middle space. Stu bet Zac – a strapping, 5’9”, 14-year-old athlete – that he couldn’t reach the end, and as strong as Zac is and as hard as he swam, he couldn’t do it. That’s the power of the current.

A bonus of the pool is that, when you turn off the current, you can put on a Jacuzzi, which has four spouts. I needed the soothing feeling after a half hour of swimming against the current. I hope it burned enough calories to make up for the cupcakes I had cooked and eaten with my grandson Blake the night before. The battle of the bulge continues and now I have the help of the Endless Pool to challenge my eating habits.

A wow experience with my “WOW” friends

It was a great way to begin the year – with a “staycation” at Pouran Spa, a getaway that is right here. We were a group of six friends who retreated to the North Shore Towers for a few hours of pampering.

Every six weeks we gather for a wonderfully-decadent morning of massage, facials, manicures, hair and total rejuvenation. In the quiet, calm spa environment with soft music playing, we got to experience each professional, trained to perfection.

This time I had a body exfoliation and massage. I never had that service before and the purpose is to rid my body of dead skin and get back the glow and softness of my skin — like when I was a baby! It didn’t quite get there, but it was close. It’s like peeling a cucumber, scraping off the top layer to get to the best part, which for me was to have my relaxing massage after the exfoliation.

To add to our feeling of being away, Pouran had prepared a feast of a lunch. Besides being a talented salon/spa/boutique owner, she’s also a great chef. She prepared for us platters of chicken salad, eggplant rolls, salad, lightly fried cutlets, tea and cookies – all tantalizingly delicious.

What a great getaway to relax and rejuvenate in our own “backyard.”