Letter from the UK: a Total Immersion Coach Reviews the Endless Pool 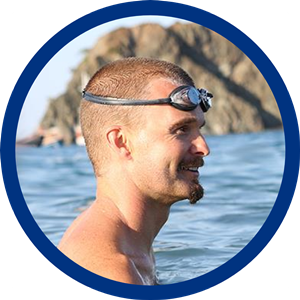 At age 14, Mat Hudson “found my home in the water.” Today, he's a 42-year-old Total Immersion (TI) Master Coach. Mat lives with his wife and kids in Oregon, while continuing to lead open water swimming camps in Turkey, his former home. In his travels to the UK, he trained in an Endless Pools® swimming machine and published the following review on his Mediterra International Swimming website.

Last July, I had the opportunity to get a little practice time in the Endless Pools Performance model owned and operated by my Total Immersion (TI) Master Coach colleague Tracey Baumann, Swim Solutions UK. The studio is located in Wraysbury, near Windsor, near London UK, where she runs workshops and TI Coach training camps.

In this studio, Tracey has Endless Pools’ Performance model. I had some previous experience in both her Original Endless Pools model (in 2012) located at another facility, and in the Fastlane unit (in 2013) at Coach Terry’s home in New Paltz, NY. Those previous experiences gave me some very positive impressions of what could be accomplished in an Endless Pool, yet with some hesitation because of what seemed to be unavoidable instability in the moving water – it seemed to me, regardless of skill level, the swimmer would have to divert some effort to just dealing with the turbulence of the inconsistent current.

But with this latest experience in the Performance model, my hesitations are gone. Though swimming through moving water is just not the same as swimming through still water, this unit created a sufficiently wide and smooth current stream that my whole body felt reasonably stable in.

In those previous experiences, I felt like I had to divert some of my foot action to helping maintain stability in the turbulence of the current. Without really strong lateral stability, I think a typical swimmer might have a hard time keeping a 2 Beat Kick in one of these, in a certain range of current-speed. But in this Performance current, I found I could slip into 2BK right away and was not feeling the current push the bottom half of my body around very much. I tried it from ‘slow’ current speeds (1:45/100y) to ‘fast’ (1:14/100y) and felt my stroke and body slip into a stable working zone quickly.

From my open water swimming experience, moving water is a normal thing to deal with, but still, swimming in a current is not the same sensation as swimming in still water or even rolling waves. It takes some adaptation. The better the current, the easier it is to adapt and get into a stroke that feels close enough to what one would use in still water. The key is how wide, deep and smooth (evenly consistent) that current is kept, along the length of the swimmer’s body. I think the Performance model did this pretty well.

There are several magical features to training in an Endless Pool. To name a couple:

You get to test your stroke skills against a fixed current-speed. Any variation in drag or force-per-stroke will, with the slightest delay, result in the body sliding forward or back. You can see this in the mirrors positioned under the body. It creates a powerful motivation to adjust something in the stroke to hold position with less effort.

Now, those mirrors are both wonderful and distracting. They are a tool and, I think, sometimes the tool will be helpful and sometimes not. Not only can you watch, from underneath, your body alignment and movement patterns of your entire body, you can see your position in the pool and any slipping back or sliding forward (because of changes in drag or force) immediately. That direct and instant visual feedback is a powerful part of the correction process. Within a few strokes, you can find the cause of that slip-or-slide and make an adjustment and test it over and over until you are satisfied.

However, those mirrors can be distracting too – I may not realize how much I have learned to lean upon my internal proprioceptive skills (= internal nervous system input which does not rely upon what you can see) for feeling and controlling position, alignment and movement patterns until the view in that mirror pulls my attention out of my body. In this case, I start responding to external feedback more than internal. It could feel, at moments, like controlling my body like a drone, by remote control, rather than by my internal pilot. It can be a bit disorienting, but something one can get used to. At times my stroke would feel awkward because I was swimming from outside my body rather than inside.

I think training both ways would be useful and really challenge the brain to grow more. I can see that I would want the mirrors available at certain times, and at others I would flip them over so I could resume training (mostly) by feel – which is what I want to ultimately rely upon anyway.

If you ever wondered how TI Coach Shinji mastered a marvelous stroke (though clearly not perfect) in just a couple years, training in an Endless Pool was one of his secrets. I suppose being Japanese would be another key too.

2. Interval Training in an Endless Pool

My dream training facility would include a 50m lap pool, access to beautiful open water (no walls!), and an Endless Pool.

That is just a sampling of the advantages afforded by each.

In this latest experience, I saw new potential to seek out, isolate then develop one’s (currently) efficient pace combination. Basically, when in a current where speed is fixed and known, I can do some experimentation with a Tempo Trainer to answer this question: within the range of stroke length and tempo I am currently adapted to* what combination will produce the least-effortful stroke at that speed?

There are a variety of ways to approach this in an Endless Pool. Let me share one…

In one practice set, I set the current speed, then worked through a range of tempos (with Tempo Trainer) to find out which felt easier. It is implicit that my stroke length must change because of the equation Speed=SLxSR. I could then switch off the TT and then see what SLxSR my brain would choose on its own, without the guidance of a TT (I would have to take video or have someone count XX number of strokes and time it so we could derive tempo).

We might hope that a swimmer’s brain would naturally find the most efficient SLxTempo for that speed, but by testing, we can remove the assumption and prove how well our brain is detecting efficient movement, or not. It is not scientifically sound, nor safe to assume land-mammals have an instinct for finding efficiency in the water.

Hence, this is why an Endless Pool would be a powerful testing device which can help us discover and hone our intuitive sense of efficiency, which does not come naturally.

I took some video of my stroke in the Endless Pool in four different current speeds. Each video segment captures about 20 strokes. I am not using a tempo trainer, so that means, in each fixed current speed, I will allow my brain to slip into whatever SLxSR it chooses.

In the first video segment, I am in a current that is stated to be (I could not independently verify it) 1:37 minutes per 100 yards, which, (from counting 20 strokes and taking the time divided strokes) equals a tempo of about 1.22 seconds per stroke. With a bit more math, I estimate I am traveling at about 1.26 yards per stroke, or about 15.1 SPL in a 25y pool, with my typical 6 yard breakout.

* I put the asterisk next to that statement above because the important thing to realize is that, in a short period of time, we can only isolate better efficiency of movement within the range of movement our brain is currently wired by training for. A new-to-swimming swimmer might immediately experience relief at a major stroke style adjustment, but an experienced one (one with deeply wired movement patterns) will not. Make a swimmer swim under conditions they have not trained for, or with metrics their body is not familiar with, or a stroke style they have not trained with, and they will require far more effort to do it, even if those conditions or that new stroke style might ultimately be more efficient for the swimmer – they will only experience that efficiency after a proper adaptation process – and unfortunately, that is often a risk in time and effort not many successful-so-far elites are willing to take. I don’t think there can be a reliable 30-minute-experiment of whether a new stroke style or new SPLxTempo combo is more suitable or not for an experienced swimmer – and the longer they have been swimming within their preferred range, the longer it may take to rewire the brain to access the advantages of a truly more efficient movement pattern. In this case, it can really be harder to teach an old swim-dog new tricks. But the most open-minded (or desperate, or injured) ones just might consider it.