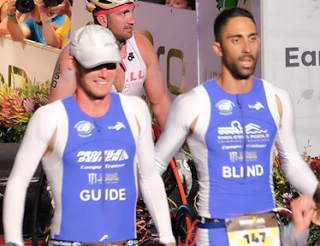 Great sports stories are about overcoming adversity. While the 140.6-mile trek of an IRONMAN triathlon seems sufficiently adverse on its own, Steve Walker and Derek Fitzgerald overcame so much more to finish the grueling course at Kona.

The Marine
Steve Walker was a U.S. Marine when his vision began to fail. His rare ailment, retinitis pigmentosa, has progressed to the point where he’s almost completely blind.

After accepting that he was un-deployable, Steve recalled watching IRONMAN triathlons on television as a kid. He decided that, even with his eyesight failing, he would dedicate himself to the sport.

In the summer of 2013, he completed his first triathlon, a sprint. The 2015 IRONMAN World Championship was his tenth.

Endless Pools® is proud to sponsor Steve, who now trains for triathlon with the Endless Pools Fastlane swim current generator in his backyard pool. You can hear him relate his inspiring story in this video.

Like many pro and age-group triathletes, Steve praises his Endless Pool swimming machine for its accurate recreation of open-water conditions. “The last thing that I did the night before leaving Los Angeles was take one more swim in the [Fastlane], and once we got out here into [Kailua] bay, it felt like the same thing, just a little more salty.”

The Survivor
Derek Fitzgerald survived Non-Hodgkin lymphoma. But the chemo that kept him alive damaged his heart. After his heart transplant, he felt the need to “pay it forward.”
He began running, then learned to swim and bike. “I’m the only cancer survivor/heart transplant” to complete a 140.6 triathlon, he told us at Kona.

You can hear more from his near-miraculous journey in this video.

Last night was insane. Chris is amazing, I couldn't have done it without him. This moment with my daughter sums it up for me.

#Ironman Derek Fitzgerald showed us his #tinman #tattoo at #imkona yesterday. He completed his first #ironmantri after a heart transplant! We know he's going to rock Kona this weekend! #inspiration #imkona #IMWC #kona2015