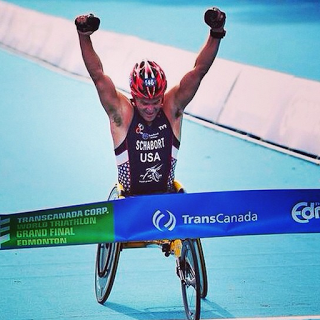 “My life has changed in a second,” says Krige Schabort, and that’s been true more than once. As he prepares for his sixth and final Paralympic Games, the 2015 ESPY Award winner reflected on the improbable and inspiring path that may well lead him to Olympic gold.

Lemons into Lemonade
While serving in the army for his native South Africa, Schabort lost both legs in a surprise bombing in 1987, during the Angola War.

After learning that Schabort had been a lifelong athlete, enjoying basketball and swimming, his occupational therapist introduced him to wheelchair racing.

“I was tickled when I saw these guys going at those speeds on the track,” he recounted in an interview earlier this year. “And then, I decided I want to see if I can get a racing chair and start track events.”

After overcoming “the only tough part,” actually acquiring a high-priced racing chair, Schabort participated in five Paralympic Games as a marathoner. He earned a bronze in Barcelona and silver in Sydney. He then made a major switch.

Discovering Triathlon
“In 2008, my sponsor for my racing wheelchair went to Kona” for the IRONMAN World Championship. “‘You should do this,’” he recalls being told. “‘You will love it.’” Apparently, his sponsor knew him well.

Adding swimming to his repertoire seemed a natural fit. “I grew up on the ocean,” he recalls. “I used to swim a lot. A big part of me is attached to water.

Besides winning his own division, “I was #300 overall,” he says proudly; that’s an impressive achievement for a race that garners some 2,000 triathletes!

Training at Home
For convenience and to train in open-water conditions (against a current, with no flip turns), Krige had his own High Performance Endless Pool installed in his yard.

He finds that the Endless Pool has added benefits. “It’s good for our family, it’s good to have in winter. My boys are swimmers, they are triathletes.”

In-place swimming in the Endless Pool affords opportunities for real-time feedback; with Endless Pools’ underwater swim mirrors, he’s observed progress in his technique, particularly in “the initial part of my pull. I used to go too deep; I did not have a high elbow lift. I’ve been working on that in the Endless Pool.”

He combines his Endless Pools training with lap pool training and open water swims “with a big group – 50 or 60 swimmers,” when he’s not traveling. So after refining his stroke at home in the Endless Pool, “then I can see how it transferred. I think it’s great to have both options.”

Changing Course … Again
After winning his division at the 2011 IRONMAN World Championship, Schabort's life, again, changed in a second. "That week after, riding with my kids on their bikes, a car hit me – a big setback for me. That kind of training was just not possible any more.”

With his indomitable spirit, Krige didn’t give up. Instead he scaled back from the 140.6-mile IRONMAN format to Olympic-distance, which is just over 32 miles. His first year in the new format, he qualified for Team USA.

“It’s hard to turn away from longer distances and go short again,” he observes, though he managed the transition with great success. At the ITU World Championships, he won gold in 2014 and silver in 2015.

The Road to Rio
Now a U.S. citizen, Schabort is preparing for his sixth and final Paralympic Games as a member of Team USA. He’s optimistic, and with good reason. “I’m currently number one on points in the world,” he notes.

With his 53rd birthday this month, Schabort knows his competition days cannot go on forever. Of course, with his energy and ambition, he’s not retiring, and neither is his Endless Pool.

“I would like to do coaching here at my house. That would be great. In the Endless Pool, you don’t feel so lost, and you can have someone right next to you the whole time.”

Of course, there could well be the added bonus of having an Olympic gold medalist as your swim coach.

Proud of my uncle #krigeschabort for becomming the #2014ITU World Champion in his division! Over 50 and still among the best in the world! #wheelchairusa #yster