Letter from Germany: Swim to Infinity and Beyond with Endless Pools 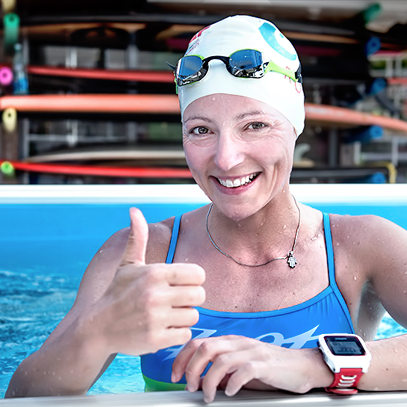 ‘Din,’ as she’s known in the blogosphere, is the creator of the Eiswuerfel Im Schuh blog (That’s German for “Ice cubes in Shoes.”) Along with her sports photographer, she’s always on the lookout for the next challenge and new images. While at the 2015 IRONMAN® World Championship, she took up the challenge of test-swimming in the Endless Pools® swimming machines located near Kailua Pier. Here’s her report, in translation.

As a true July girl and Cancer woman, if there’s water nearby, I’m there with my swimming gear. This was no different during my Hawaiian adventure last year. From the moment I arrived in this idyllic little town, the Aquatic Center in Kona was luring me. An additional blog post about my training sessions is already in progress – more on that later. My meeting with the awesome team from Endless Pools® was much more exciting.

Nothing can beat the experience of training in the open water – especially not when the ocean is right at your doorstep. Nevertheless, I couldn’t miss the chance to accept the team’s invitation to go for a test swim in their counter-current pool.

Now, I won’t be able to have this object of desire in my cellar or garden any time soon, but I have to tell you how incredibly fun it was. … It’s also a super-practical and unquestionably effective training tool. At about four by two meters, it’s compact, but if the current’s pace gets too quick for you, you can easily stand up in it. The back wall is close, so you’re more likely to end up against that before you’d sink.

We start by reviewing the most important facts, and yes, some people have pools like this in their cellar. I can’t get over my amazement.

I thought a bit about where to begin, and maybe my own non-existent ability isn’t such a bad starting point. Once the team had given me the low down on everything I needed to watch for, it was straight into the pool, which was perfectly sheltered from the weather there. They suggested a speed. Yes. Sure. That’ll be great. I can manage that. However, I was forgetting two, maybe even three, tiny details!

I hadn’t realized that there’d be so much to marvel at. It’s silly to somehow ignore the fact that someone’s talking in miles and not kilometers (when talking about the speed you want to – or think you can – swim at), simply because you’re so excited. Then, this team stands at the side of the pool, watching what you can do.

So off I go! First, I paddle until I get a feeling of how quickly and intensely the water is dragging me out of the optimum swimming position. At the same time, I was ogling my technique in the underwater mirror. I slowly grappled my way forward and became pretty darn short of breath. For whatever reason, I found it quite difficult at the start to get into a gliding phase, even briefly. I was totally fascinated by the mirror, but it didn’t help. After a manic few minutes, it was time for a breather.

I took things a little easier on the second attempt. We slowed the current and started again. Pull, glide, loose kicks, push down hard, and see whether you’ve somehow got it down. At the same time, you’re concentrating fully on everything you’re doing wrong. Amazing. I’d never seen myself in this way before. Even video recordings aren’t as helpful as what I saw in the mirror below me.

Now, when I really think about it, maybe I should clear out the cellar after all, or dig a hole in my garden… What was my right arm doing there? What’s the left one doing now? The team was extremely friendly and assured me that it didn’t look bad at all.

I surfaced and went back under again. I didn’t want to get out. This is my pool. Well, at least my own training session. I did the crawl against the swim current. In theory, I could swim into infinity and then a little further still …

All the while, the team explained everything to me down to the smallest details. You can set up the whole thing – counter-current system, pool – in any configuration you like, inside or outside, and securely covered. They wanted to know if I owned a pool and how I train. Well, always preferably in open water, not in my own pool. If I did own one, I’d only need the Fastlane® system, which installs in traditional pools.

What about a natural pool with a Fastlane – wouldn’t that be a dream?! After all, it can be built into near enough every existing or new pool. The team waxed lyrical to me about the possibilities. They’d have liked to have a swim in that day’s heat too.

Fun fact: the pool and its motors are connected to one another via hydraulic tubes outside the pool. This hydraulic system is fed with some 20 liters of biodegradable plant oil. Just so you know, the oil isn’t suitable for eating!

The water flowed steadily past me. The current was considerably wider than me, so it was easy for me to drift to and fro. I didn’t have to worry about that. No matter how deep I reached, I could feel the current. When I stopped swimming, the water pressed me against the wall. If I moved too quickly while I was swimming, I could easily hold on to the front grip or push off.

The team changed the speed every now and again, so I was able to try a few out. Every time, it took a while until I got used to the different conditions.

It was fascinating and, at the same time, a very enjoyable experience! The speed is regulated using a remote control, and it seems infinitely variable. Beginners, advanced swimmers – I think it’s an effective way to train for everyone. This equipment also has a really high fun factor – particularly when you have such a great team at your side.

So, would it be your kind of thing? Have you ever swum in a counter-current pool?

P.S. Once again, my Zoot two-piece, reflective Arena Cobra goggles and FR920xt were with me on the front line. However, the FR920xt was too confused to keep track on of the distance I swam. But the Endless Pools team took care of that. By the way, the underwater images were recorded using a TomTom Bandit Action Cam.

All pictures in this post were taken by my photographer. He and I own the rights to these pictures. It is possible to use these pictures with our advance written approval.