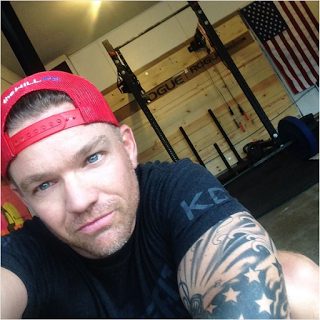 "I'm high-mileage for my age, that's for sure," says Jeff. A 46-year-old Navy veteran, former wrestler, and dedicated CrossFitter, he now tailors his workouts differently than when he was younger.

"Twenty-six and under, you're still made out of rubber and plastic," he half-jokes. "As I get older, my knees and back don't want to lift." To keep himself fit and active, he incorporates more swimming.

As you can see from his recent Instagram posts (below), Jeff has recently trained with a waist tether. The tether "kind of holds you up out of the water, so it's cheating a bit." He's also trained with the Endless Pools Fastlane®. "There's no comparison, that's for sure," he declares.

The Fastlane current is "smoother." When training in a group, "it's seamless. We're not constantly changing the tether." Jeff also finds that it's better suited to the open-water training required by triathletes.

A fan of sprint- and Olympic-distance triathlon, Jeff calls the Fastlane current "very similar" to open water currents. "You still have to maintain a straight line. My last triathlon swim was 1,000 meters; I probably swam 1,500!"

Like the open water, the Fastlane current can "pull you left or right," so it's creates the discipline to swim more efficiently for the real-world conditions of open water swimming – and leave yourself with maximum energy for the bike and the run!

Jeff still does CrossFit two days a week, and he now sees even some of his younger workout buddies cross-training in the pool. "A lot of CrossFitters will swim or do yoga for recovery. You have to take those days off" because the workouts are so demanding.

That doesn't mean that his swim workouts are easy; his swim coach often leaves him sweating and breathless. "I didn't know you could get that workout swimming!" he enthuses.

As he's sees it, swimming "is like wrestling: if you stop, nothing good happens. It's the same sink-or-swim mentality."

"It's a great product," Jeff concludes. "I'll probably buy a smaller one myself someday."