Let's Put a Pool on the Roof!

I first met Bill and Connie outside a run-down time capsule of a house in west Seattle. It was a dark-brown and avocado disaster from the 1960s, with a floor plan that was 14 ft. wide and 60 ft. long. Bill and Connie asked me to offer an opinion of the house's condition, and to counsel whether the advantages of the site outweighed the drawbacks of the house.

There was no doubt about the site. It was a secluded spot set back from the street, on the side of a steep hill with a view to the south and west. From the living room you could see from Alki beach on Elliot Bay to the mountains of the Olympic Peninsula, 30 mi. distant.

The old house was something else. From the front, it read as a carport affixed to a garden shed. From the side and the rear, the daylight basement was shaded by a decomposing wood deck along with deteriorated siding and windows. Parts of the downhill-side foundation and the slab floor in the basement had sunk 4 in., finish work was uniformly cheap and nasty, and a 1970s addition to the living room drooped off the side of the house like an old saddlebag. On the other hand, the basement retaining walls showed no cracks, most of the framed walls looked straight, and the placement of the house at the edge of the sloping site took perfect advantage of the breathtaking view. We declared the house an exceptional opportunity.

The New Plan Begins with an Upstairs.
With a view such as this one, the transformation agenda naturally called for a second-story addition to the house. At the west end, Bill and Connie wanted a new master bedroom over the living room to take advantage of the dramatic view. They also wanted to update the existing living spaces within an open floor plan. At the east end of the main level, a separate entrance would lead to Connie's home office. Outside, the carport would be converted into a two-car garage with a rooftop deck and a hot tub. Instead of classifying their tastes as traditional or contemporary, Bill and Connie's primary concerns were for materials and details that would be enduring and easily maintained.

Structural Innovations Expand the View
The new windows--especially at the corners--eliminated essential shear walls needed to brace the house against wind and earthquake loads. Instead of relying on conventional plywood shear walls at the corners, we braced the house with a steel frame.

Built from 8-in. wide flange steel I-beams, the frame was welded together in place. The frame becomes a visible element in the house as it extends from the top of the concrete foundation wall to the top floor plate. The columns of the frame are visible inside the living room and master bedroom. A similar frame reinforces the front wall.

A sweeping steel canopy shelters the front door. The canopy frame is suspended by steel rods, and it is covered with corrugated decking. To make a clear break from traditional housing precedents, we chose the steel both to promote the durability of the structure and to reinforce the contemporary virtues of the design.

Holding up the slabs dips in the downhill foundation and the slab proved to be less of a concern than everyone imagined. To prevent further settling of the house when the new floor was added, we installed pneumatically driven steel-pipe pilings on 2-ft. centers along the 60-ft. wall. Each piling was then affixed to the foundation with Chance Anchors. These anchors are steel brackets that grab the foundation with epoxied bolts. Adding the anchors stabilized the wall, allowing us to build atop it without fear of further settling.

"Let's put a pool on the roof."
Our first owner-initiated change order was the lap pool over the garage. This isn't as audacious as it sounds. The swimming spa is much smaller than a conventional lap pool (a propeller creates an adjustable current of water to swim against) and therefore can be economically maintained at a temperature that allows year-round use in our mild climate. Such a spa does, however, weigh about 20,000 lb. when full of water.

After some delays for engineering and permit adjustments, we poured new footings, beefed up the outboard garage wall and installed some large glulam beams. Commercial-grade plywood joists topped with conventional-plywood decking span the big beams. And a torch-down single-ply membrane protects the roof. 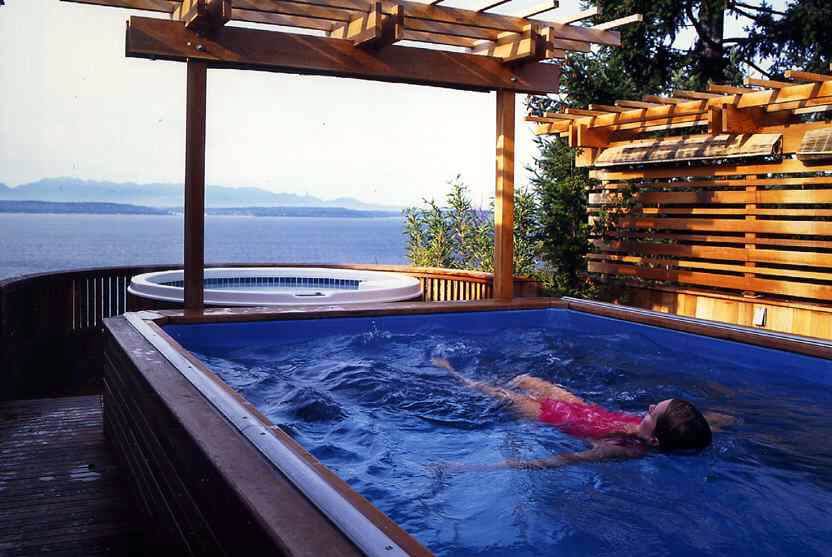