6 Tips for Life Success & Weight Loss from the ‘Yes Doc’ 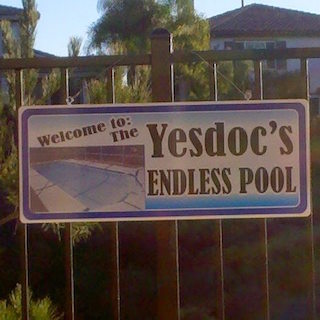 They call him the “Yes Doc.” That’s ostensibly because he loves progressive rockers Yes (“I’ve seen the band over 100 times,” he notes) but it could as easily be due to his insistently positive attitude.

Scott Richards says ‘yes’ to life, and it’s gotten him through the Triple Crown of Open Water Swimming (the English Channel, Catalina Channel, and a Manhattan Island circumnavigation) and other marathon swims against a slew of obstacles. He took some time recently to share his experiences and lessons from along the way:

1. There’s No Place Like Home.
Scott is currently training for the 39th Annual Swim Around Key West this June. He calls the 12-mile swim “a huge deviation” from his cold-water swims. “It’s a very different way of training,” with greater emphasis on hydration and electrolyte replenishment.

He also sees the swim as “a full circle of my life.” He grew up in Florida, spent 25 years in California, and only moved back to his home state in 2014. “The chance for me to go back and do something in an area I grew up in,” he says, “gave me the motivation to get back in” the water after months of inactivity.

He calls the trip around Key West “a civilized swim: you leave after breakfast and you’re back home for lunch!” But it’ll also be bittersweet; his brother, Dan, was scheduled to join him, but unexpected eye surgery now prevents him from training. Scott’s Triple Crown swims inspired Dan to follow suit, and they remain the only siblings to have achieved it.

In this video, Dr. Scott Richards demos his Endless Pool. This model, purchased in 2003, sports a blue knob to manually adjust the swim current's speed; Endless Pool technology has since advanced to feature digital pace control via app or remote.

2. Do What You Love.
Scott Richards loves to swim. “The training is a joy to do. The day you actually do the swim is almost icing on the cake.” Of his English Channel crossing, he recalls, “I spent the whole swim thinking, ‘It’s so cool that I get to do this!’”

Of course, all that training takes time, and Scott’s a full-time M.D. and father. That’s one reason why, he says, “I love the Endless Pool.” While training in it almost daily, “I never let my work suffer and never let my parenting suffer. I was able to swim in the morning before my son woke up.”

For Scott, it was love at first swim. After “no more than two minutes” of his initial Endless Pool test-swim, “I popped my head up, and my kids said they hadn’t seen a smile on my face that big in years!”

He bought an Original Endless Pool® for his California home and used it for more than a decade. “It was worth the money because I was literally in it six days a week. I used to call my Endless Pool ‘my 3,000-gallon psychiatrist.’ I could get away from the stress of working 40 hours a week and being the single parent to an 11-year-old son. I didn’t have to worry about flip-turns or other people.”

“I knew that once I moved [to Florida], if I bought or built a house, I would have to have an Endless Pool in it.” Ultimately, he bought a home with an in-ground pool, and “the next day, I paid to have the Fastlane [swim-current generator] delivered. … I did my first swim on Christmas morning. It was wonderful. I felt like I’d gotten back home again.”

Among Endless Pool accessories, he reserves his highest praise for our Digital Swim Pace Display. “The pace clock really makes it easier to train and push yourself. If you add two seconds per 100 yards, it doesn’t sound like a lot; but after a half-hour, it’s a lot!”

3. Give Credit Where Credit is Due.
Scott is deeply appreciative of the open-water community, taking every opportunity to recognize those he admires. He’s even dedicated posts on his own, soon-to-be-reactivated blog to their achievements.

He quotes Alison Streeter – who’s swam the Channel 43 times, more than anyone else – as saying, “Training for the Channel is 90% physical. The day you swim the Channel is 90% mental.” He names Half-Century Club members Carol Sing and Bob West as inspirations. He credits swim clinician Karlyn Pipes with introducing him to Endless Pools. He cites his former coach, Jack Nelson, for his life-long influence.

He shows no false modesty about his own accomplishments either. “I feel a bit of pride” at having achieved the Triple Crown before the feat even had a name (“It was originally called the Three Sisters.”) and thereby helping the sport to “explode” in the years since. “Motivating others,” he believes, “is the best reward you could ever get.”

4. Take the Long View.
“Swimming is the best sport; you can do it all your life. If you swim correctly and have good stroke technique, you can continue to do this into your 80s and even into your 90s. You can do this sport pretty much anywhere you go.”

5. Eat Colors.
For his many cold-water swims, Scott packed on about 20 pounds. But for the warm-water Key West swim, he’s losing weight, using what he jokingly calls “The Rainbow Diet.”

“No white rice, no white bread, no dark chocolate,” he declares. Instead, by favoring an array of fresh fruits and veggies – “your greens, your reds, your blues, your purples” – he “lost about 26 pounds in a year.”

6. Keep Things in Perspective.
“If you can train for a few open water swims over a couple of years,” Scott muses, “everything else in life seems pretty easy.”